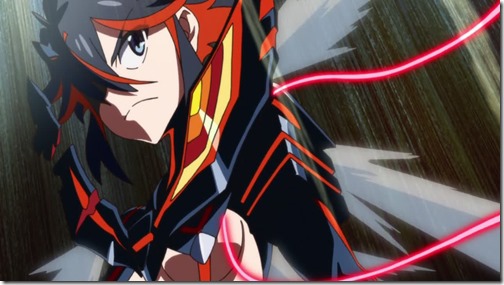 Sorry for the long drought between posts. I’ve been out of my normal routines because of work, and I’m just now catching up on this season. I’ve been able to avoid spoilers on this show, so what I write may be a bit out of date, at least it’s free from knowing what’s coming next. Thanks for sticking with us!

Ryuuko is having a bad week. In our last episode, she was man handled by the soldier from Nudist Beach, Tsumugu. And as she comes to find out, the teacher that’s been helping her is also associated with this rebellion. But her ignorance of the what’s going on in, and around Honnouji Academy. Her only answer is to keep fighting to get stronger. But as her latest battle teaches her, that path is much harder than she thinks.

Her latest fight is against one of the Elite 4, Uzu Sanageyama. The  Elite 4 represent the strongest of those that follow Satsuki, and those that have been with her the longest. Uzu Sanageyama wasn’t always a follower, and was defeated by Satsuki, and chose to follow her afterwards. His first fight with Ryuuko goes like any other, with her finding a way to defeat Uzu’s incredible eyes by using cut off pieces of Senketsu to blind him. But the tide is turned when he chooses to blind himself, allowing his remaining senses to to grow stronger, forcing a near defeat on Ryuuko. With her fortunate escape, she finds it’s better to be lucky, than good. Uzu had her at the point of defeat, with the next blow brining her demise.

The conclusion to this story brings Ryuuko to a point she hasn’t faced before: she just isn’t strong enough yet. And this is both physically, and mentally. She walks into each fight thinking she can just brute force her way through things. She has no plan, we never see her hone her techniques when not forced to fight. Her battles are essentially just bar fights, with her coming out on top through brute strength alone. But she has finally reached a point where that just isn’t good enough anymore. There are others with experience and knowledge behind their strength that outmatched her own.

With her last words in this episode, she reaches the conclusion that she needs to find out exactly what her data was working on. Maybe there is some knowledge in that quest that can help her out. But as with any good heroine, she’s also in need of some fundamental training and skills enhancement if she plans to defeat those at the top.