This image does a fair job of summing up both the show and my hate for it.

Having only recently begun to watch anime, the list of shows that I have watched is rather low, I believe only around one hundred or so. Yet, one franchise that I cannot get enough of and refuse to ever stop watching, is the Gundam franchise. I grew up watching Gundam Wing and G Gundam, and it holds a very special place in my heart. I love the action, and I truly enjoy the different types of interactions between the characters within the Gundam universe. Yet though I enjoy the Gundam universe, I have to say that ZZ Gundam is one of the worst anime I have watched as of yet. Not only as a sequal to an amazing anime such as Zeta Gundam, but as a stand-alone anime as well.

5. The Villains are more wacky cartoons than they are evil conniving villains

Let’s just take a quick look back at some of the main villains within the Mobile Suit Gundam series. First off, we have Char, the quintessential MSG villain. Char was a conniving intelligent man who always had his next move planned. In Zeta we have Scirroco who appeared to be this omniscient God. In ZZ, we have Mashymre Cello, a fool of a man who carried around a rose of Haman Karn. Mashymre was more of a romantic renaissance man than he was a true villain. Rather than kill the men of the Argama, Mashymre instead went off on tangents where he lamented his love for Haman and completely fell out of any fight he had with Judau and the crew of the Argama. Not only Mashymre though, most all of the villains in this show were similar to this, including Glemy Toto. Though Glemy’s character was strong in terms of his relationship to Judau’s sister and Ple two, in the end, his love for Roux Louka proved to be too overwhelming as he degraded into another useless character with no real motivation. 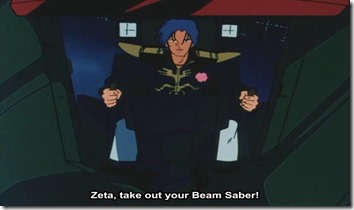 4. The Characters are all below the age of twelve

While personally I don’t have a problem with this, ZZ takes the characters lack of maturity and age to an extreme. While I can acknowledge that Tomino was attempting to reach a younger audience, creating a cast of entirely young characters was not the best choice to follow Zeta. Both MSG and Zeta started off with a small cast of young people, forced into taking on the role of soldiers. As the show progresses though, they slowly begin to mature and develop real personalities. ZZ on the other hand, starts off with a group of immature kids out to make money by stealing the Zeta Gundam (which was one of the most disappointing plot points ever by the way), and ends with a group of immature kids out to save Earth. There is no development, and no matter what anyone says having the characters grow up in the last four to five episodes does not equate to a set of developed characters. An immature kid does not just decide to grow up, there has to be a good reason or idea behind it. Not newtype bull shit. 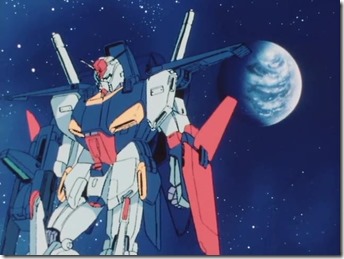 THOSE ARE BEAM SABERS ON TOP THERE. YEP. GIANT. BEAM. SABERS. 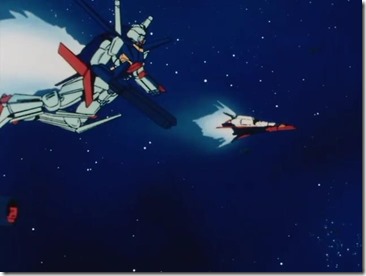 It’s beam rifle is twice the size of that fighter. I’m just saying. Not like it’s a big deal or anything. Oh wait, it kind of is.

One of the main reasons that both Zeta and MSG are so great, is because the plot felt as if it was one piece of an entire story. A few episodes may have drifted off every once in a while, but the drama was always still there. The main conflict between either the A.E.U.G. and the Titans or the Earth Federation and Zeon, was always in the background and was never forgotten about. In ZZ though, the plot constantly felt as if the story was drifting off. Gone was the cohesive plot of Zeta and MSG, instead replaced by different arcs that never appeared to be connected. Only by forcing them to in the last ten episodes was Tomino able to piece it all together and force it into one plot. By this point though, it was too late. Even with all of the arcs coming together, it still felt as if none of them mattered and that the characters introduced within them were all pointless. It was hard to care about anything that happened to the characters, making it more of a chore watching them, rather than an entertaining show. 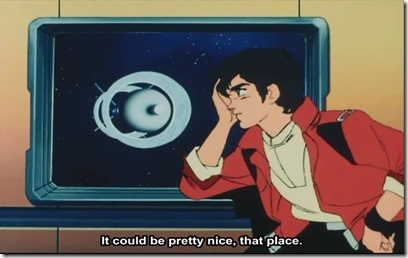 Nope, it’s an awful place no matter how you look at it.

1. Completely and utterly destroys the good points of Zeta Gundam, while upholding all of the bad ones

Zeta Gundam was, in my opinion, one of the greatest examples of mecha anime ever created. AM I biased in saying this? Yes. Do I particularly care? Not really. If you happened to enjoy ZZ Gundam, then more power to you. Anime is anime and we all have different tastes and preferences. No matter how you feel about ZZ Gundam though, we should all be able to agree that the shift in tone, plot direction, and character development between ZZ and Zeta were monumental. All of the amazing aspects of Zeta were entirely left out of ZZ. The impact of death, the difficulty and fighting, and even the basic intereactions between characters were all just gone. While in Zeta one could sit through an entire episode and enjoy both the mecha action and dialogue, sitting through ZZ’s dialogue felt like tasting a disgusting medicine to help you go to sleep. The characters were about as shallow as can be expected of any typical twelve year old and it appeared that even the adults in the show wanted to be on their same level. I found myself constantly just skipping the dialogue and moving straight to the mecha action, which even I will admit looked consistently clean and well-done throughout most of the series.

I wish I had an image to go along with this paragraph, but I don’t. One image cannot sum up my pure disappointment with ZZ.