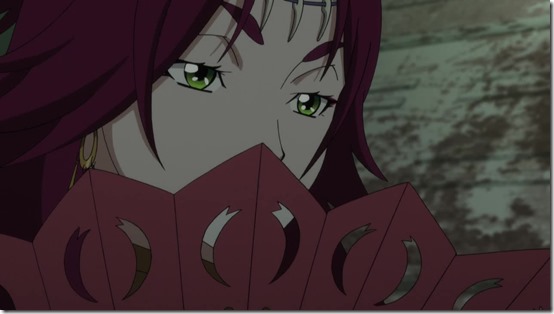 And just like that, Suisei no Gargantia has lost what little credibility and watch-ability this show had left. In all honesty last week, when we out our ending theories out there, I had a slight hope that it wouldn’t come to this. I thought, with only two episodes left, this show just might pull out a great twist, and we’ll all be surprised we doubted it (well, at least somewhat). But, once again, this show takes a bland, generic, sci-fi route, and only disappoints us going into what will probably be an utmost cliché ending.

With all of the hints dropped last week, we do get the anticipated clash of ideals. What little influence Gargantia had on Ledo takes root, and he’s off and fighting the commander and his ideals of a greater good. While, on the opposite front, Pinion and the Surfing Lobster wage war against the communist religious zealots. I guess this is where I’m supposed to say that this fight is representative of the fight hundreds of years before between the humans and evolutionists. That the conflict still crosses time and space, bringing a class of ideals wherever it goes.

But I feel nothing for this conflict. I honestly couldn’t care who wins. Ledo’s character has been so fluid in it’s mission, that for all I know, he’ll join the Hideauze once this fight is over, and destroy what’s left of humanity on Earth. The writing has done his character such a disservice. And for that matter, all the characters. Their personalities are only as deep as the digital ink used to create them. And the worst of them is Amy. Her character has been almost relegated to a meaningless speedbump on Ledo’s journey of conflict.

And the punchline of this show being the robot reaches a certain level of sentience by imitating it’s pilot, and carrying on it’s mission from the Human Alliance is laughable. No one could think of a better story than that? But, it fits right in with the retread writing this show has done to this point. Why stop now?

I know this has come off as a rant, and for that, I apologize. But my disappoint in this show will only be abated once it reaches it’s conclusion this week. In a season where we were blessed with three mecha series, I would have never guessed that Majestic Prince, by studio Dogakobo, most notable for Yuri Yuri and Myself; Yourself,  would produce a such a solid show. And conversely, watch Gen Urobuchi and associates completely destroy another. It just goes to show you never know what’s going to happen.