Do you know about the French community? The Swedish community? The German community? For a secluded Dutch nerd vampire like me, all of these are one big mystery to me. Before last week I had never even heard of Japantag (that’s German for “Japan Day”). But by some chance and a lot of impulse I found myself in Düsseldorf on that sunny May 25th.

First impression: there’s a lot of people! Japantag took place alongside a good mile of the Rhine and almost every square meter was filled. There was a lot of cosplay going on, mostly the store-bought Naruto ones, but I spotted some nicely tailored ones at the “fashion show contest”. I saw a bit of archery (which was dreadfully boring unfortunately), ate some way too expensive karaagedon (€7,50, should’ve gone for the yakisoba), saw some kids putting up a performance on the taiko (which was illegally cute).

No, I did not do anything illegal. I think.

Japantag is something the city of Düsseldorf is supporting. There was an opening speech by someone who I believe was the mayor, speaking about the high amounts of Japanese living in Düsseldorf. That said, it felt a lot less like a “Japan day” and more like a weeaboo day, purely because of the large amount of cosplay. There were a lot of stands with a lot of varied content, but the busiest by far was the tent with the dakimakura and the like. I didn’t spot a lot of actual Japanese, other than the ones running the stands. Good job weeaboos, we’ve conquered another part of the world.

If I have to compare it to my own country (The Netherlands), it’s hard to imagine such an incredible public display of Japanese nerdiness over here. Not that there aren’t any anime or manga fans here (quite a lot in fact), simply being a smaller country means we couldn’t possibly muster up such an event. Seeing cosplay in random coffee bars is quite a sight to behold. 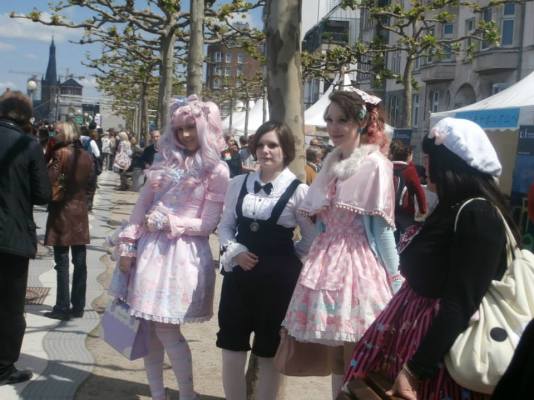 Speaking of events, this weekend is Animecon in The Hague, the biggest con in The Netherlands. I’ll be there on Saturday so say hello, or hallo, or even こんにちは.