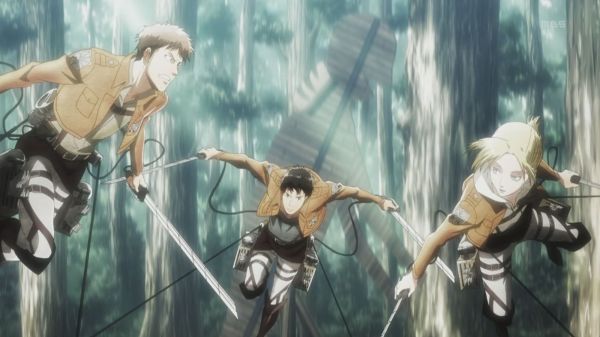 After watching this episode, and re-reading the relevant chapters of the manga I’m willing to state that Shingeki no Kyojin has started its case studies on humanity.  To make things even better, the first look at humanity is quite the thought-provoking conundrum.  One which any military expert shouldn’t have to think about.

If you’re best 10 recruits are given the leisure – masked as an honour – to serve the King, then who do you send out to fight the Titans? Truly a defeat for humanity when the best of a reluctant population choose the good life in the innermost wall.  The bigger defeat is that this reward has to be offered to motivate troops, most of whom don’t have any desire to join the one legion of the army that fights.  A ruthless cycle that just won’t stop. 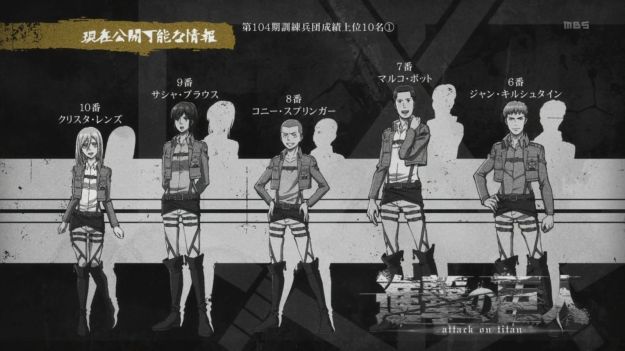 The above was the basis of the entire episode, and all the lead-up and aftermath we we’re shown just served to compliment the theme of the episode.  Starting with the description of the best ten recruits – at this point they had not been named the best ten – we got a real epic war story atmosphere.  The graduation scene and gear training scenes both packed a lot of punch, with some excellent soundtrack choices; the rock music on the training scene was just brilliant as was the bgm in the graduation.  On top of serving as the introduction to a group of characters, it served as the springboard to further debate both immediately and later on.

The topics of debate themselves are thought-provoking, to say the least.  It’s human nature to want to protect yourself, which one could argue is engraved in our DNA.  No right or wrong answer exists for the situation, and that just adds one more hurdle for humanity to clear if they ever hope to take back what’s theirs.

Eren’s streak as the driven wannabe avenger of humanity continues.  He’s at the centre of the debate in the episode, and his convictions have yet to wane.   His role in the series is still one of a clarion vision for a counter-attack, and that’s what keeps him at the centre of the story despite new characters getting more screen time as the episodes go by.  At this point he’s still just a kid with his ideology, and not a true main character with the ability to change the world.

His time has come.  If the remainder of the short-lived training arc didn’t catch your attention then I’m sure the ending would have.  The sombre days are over for the time being as Shingeki no Kyojin picks up the pace once again for another battle.  You can’t deny how exciting the prospect of seeing the newly trained recruits in action, can you?