Kotoura-san is still my favourite of the new/non-sequels this season. That said, it does have its flaws.

Truth be told, I wasn’t that impressed with this episode.  After three strong episodes, episode four just didn’t have the same effect.  More than anything, it’s the transitional nature of the episode.  We’re moving onto a new arc, so it was time to tie up this one.

The episode itself revealed a few flaws in Kotoura-san.  In particular, the comedy involving Kotoura’s grandpa was not to my liking.  Seeing as how we get enough of that shameless behaviour from Manabe, we didn’t really need more of it from a different character.  It just felt unnecessary.  More-so since Manabe also had his own perv moments.

As I said, the main reason was the transition from this arc to the next.  In Kotoura-san‘s case, it was fine yet nothing praise-worthy.  Just a quick wrap up with friends coming to the rescue – nothing to write home about.  It was a little cheesy, corny and generic.  Moritani’s apology was the cherry on top.

Putting aside all the negatives I saw in this episode, I still need to give this series credit.  It manages to remain so heart-warming and adorable.  After four episodes, that’s what I’m happiest about.  The comedy and drama can be very good but its the simple joy of seeing Kotoura gradually find happiness.  What more could you ask for?

She’s still very much the broken character.  An eternal victim who was only accepted by her grandpa and the monk of the temple.  Her transformation is endearing and touching to watch, even though it was predictable from the start.  Even though I know it’s going to be about her gaining more friends and acceptance, I’m surprised at how much I’ve taken a liking to her.  Not just that.  By now, I’ve become invested in her and that alone is enough to keep me happily watching Kotoura-san. 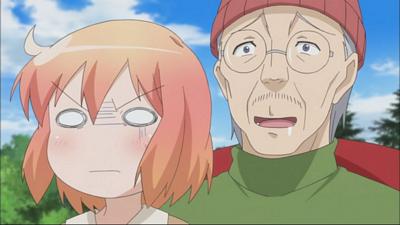 With the first arc over, I’m looking forward to the next part of the story.  For now it looks like a return to comedy – no complaints – though I’m sure we can expect more drama in the future.  It looks like Manabe will indulge in some yuri shipping next!