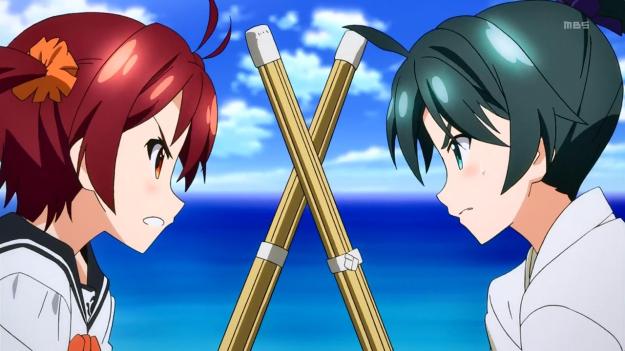 Battle over who gets to keep Momo as their waifu.

Another episode, another main character introduced. This time, Saegusa Wakaba gets to show off her skills with the blade as Vividgreen. This episode didn’t bring a lot of stunning developments to the table, though it’s still a decent episode with the elements we come to expect from Vividred. Yes, that means more buttshots.

Mecha references this episode include TTGL and Gundam. Don’t start quoting me on mecha however. I like the occasional mecha, but don’t consider myself a big mecha fan. If anything though, Vividred makes me wish I played more than just five minutes of Super Robot Wars. I even think those five minutes were from OG…

On the shipping side, it looks like RedBlue is still safe as Green seems more interested in Peach. Not like that’s ever going to stop Red from going full harem, but that solution is a bit too easy. We’ll aim to keep it spicy. Black, making more minor appearances in this episode, is shown to be in the same class as Red and Blue. Crushing must it be to see her beloved Red fawn with Blue all the time. What ploy could she possibly develop to sink that ship and have the Red half dock with her? 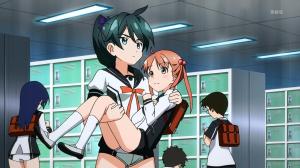 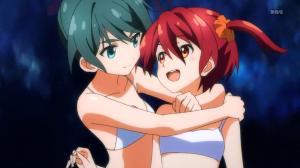 This episode does further showcase a bunch of pacing problems associated with the short length of the series. Another episode where the first transformation scene is closely followed by the docking scene. I suspect this won’t change for the next character at least, which will make it three in a row. They don’t spend a lot of time trying letting developments surrounding Wakaba’s character settle in. I still think they’re doing a good job with what little time they have, but the time is indeed little. Is it too soon to start crying for a second season?

Two characters left to introduce, next time will be Himawari’s turn. Already making a proxy appearance of sorts this episode, she seems to be going for the hacker archetype, which makes me wonder if her battle role will be more supportive. More importantly, who am I going to ship her with? The gramps?