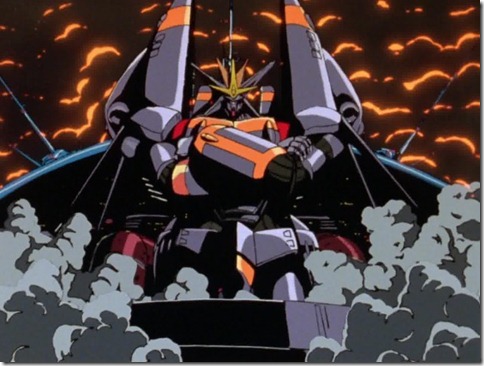 This year, I had the privilege to participate in the Reverse Thieves Anime Secret Santa project. I thought it would be interesting to see what someone would choose for me, just based on what I had registered with my Anime Planet account. My three recommendations where Gunbuster, Kaiba, and Dennou Coil. I really have had no desire to watch Dennou Coil, but I understand the recommendation. After looking up Kaiba, I was definitely interested, but I decided to download it later to watch. That left Gunbuster, which has sat on my “to watch” list for quite some time now. Was it what  I expected it to be?

In the very near future, a race of huge, insect like aliens are discovered traveling the galaxy. These aliens, or just Space Monsters,  seem dedicated to eradicating the human species. Humanity takes up the fight by developing space going battleships, and giant fighting robots. Pilot candidates for the fighting robots are selected from the best and brightest youth. The story begins in the year 2023, and centers on young Noriko Takaya. Although Noriko`s father was a famous Captain in the space fleet, who was killed during one of the first battles of the war, her own talents as a pilot are questionable. Noriko idolizes the beautiful, competent and talented Kazumi Amano. Amano is the top RX-7 pilot at their school. One day, a new instructor, Kouichirou Ohta, joins the school, and takes extra care to coach up Noriko. And that’s when the story get’s interesting.

I actually found this short series fun to watch. It has a much different feel to it from the Gundam series that I’ve watched, in that it centers around the emotion of the two main female leads, rather than the politics of the world influencing the ‘why’ they fight. In a way, their struggles to take on the challenge of the human race reflects their own growth from you girls to warriors for the human race. This series does a good job of capturing the emotions of their struggle in the midst of a world that is quick changing as they fight the threat to humanity.

One fascinating aspect, from an engineers point of view, was how they emphasize Einstein’s Theory of Special Relativity. The theory, simply put, is that as an object approaches the speed of light, the observed time for a stationary observer passes faster than the observed time for the object in motion. In the case of Gunbuster, whenever our heroines travel at speeds near the speed of light, the writing and directing focuses on the fact that the world around them is changing in what appears to be the blink of an eye, leaving them disjointed from everything  they used to know. This plays into a constant theme that the girls must sacrifice the world and people they know, in order to finish the fight, and save humanity.

The show does of it’s cliché moments here and there. When Noriko pilots the Gunbuster, she has her special attacks, with their own unique names. For me, it’s a comical relief in the midst of an otherwise sad storyline. And of course. they have to have a bath scene, with an ‘open air’ bath, where the guys can fly by and watch the girls bathe. But thankfully, the show keeps this kind of stuff to a minimum, which in 6 episodes is kind of essential.

I found Gunbuster to be a great anime to watch. With the mix of great science and human emotion, and a perfect length of 6 episodes, this series was a fun watch. After watching AGE this year, I found this show to be a well needed contrast, with it’s theme of self-sacrifice for the greater good. All that’s left is for me to finish the short Gunbuster science lessons , with Diebuster as the follow up. 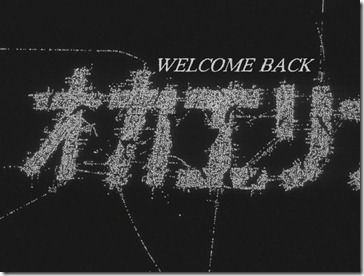