Welcome to a new segment here an Anime Audiolog. As I mention in my what to expect post,  we will also be mixing in posts on Manga as well. For those of you that know me, I tend to track, and read, quite a few series. So, each weekend I’ll post one or two manga series that I think you all will enjoy. And this week, I’m start off with two popular series: Denpa Kyoushi and Nisekoi. 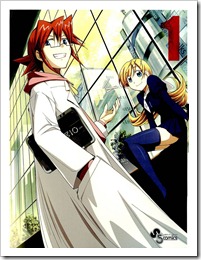 Denpa Kyoushi, or “He is an Ultimate Teacher”, is about Kagami Junichirou, who was known as a physics genius when he was a teenager, who even built a time machine. However, after college, he suddenly lost all interest in science. As a NEET, he’s devoted himself to his anime blog, video games, and nerdy collecting habits. He claims he has a serious illness called “I can’t do anything I don’t want to do.” Desperate to get him to do something with his life, his little sister manages to get him a job teaching physics at his old high school. Nothing he does is conventional in any way.

Denpa follows a very similar format to another poplar manga, The World God Only Knows (Kami Nomi zo Shiru Sekai), Kagami works through challenges with each of his students, and “conquers” them in order to build up his classroom. Each arc features one of his classmates, as he works through each of their unique situations. Many of the story arcs parody or mimic other popular manga, with humorous results.

The manga is light-hearted, easy to follow, and surprising morally upbeat. Each story arc is complete in its’ self, while continually building the world at the same time. And its’ primary theme of being who you are in the face of adversary , sends a positive message. With a little something for everyone, I think you’ll find this as enjoyable as I have.

Nisekoi is a romantic comedy following the main characters Raku Ichijou and Chitoge Kirisaki, whose fathers are leaders of the Yakuza and the Gangsters respectively. Their two families constantly clash in an intense rivalry and are on the brink of an all-out war. In order to create a truce between their two groups and avoid city-wide destruction, the leaders decide that Ichijou and Kirisaki will become a couple during their time in high school. This is not made easy by the fact that Raku and Chitoge aggravate each other with almost an equal passion as their families. Complicating matters even further is a locket Raku has carried for 10 years, symbolizing the promise he made with a girl to marry upon opening the locket with her key. And chances are, one of the girls in this romantic comedy is the one.

This manga is a classic romantic harem comedy. Raku already has a love interest, when he’s forced to start a fake relationship with Chitoge. Of course their relationship is under constant scrutiny as everyone wants to know if it’s real or not. As as the story progresses, more girls enter the picture. And relationships that were once strained not become easier. If you’ve ever read Ichigo 100% (Strawberry 100%), you’ll quickly recognize the similarities with Nisekoi.

This romantic comedy is a joy to read weekly. The situations are generally funny, and the shippers out there will have a field day with their character pairings. But as with most romantic harem comedies, there is only so much before you start wanting to see it reach a conclusion. And much like Ichigo 100%, that final pairing may not come until the last chapter. It’s been out for less than a year, so pick it while there’s only a few chapters and come join the fun.