A big thanks to Ghostlightning for filling in last week. And after a week’s hiatus, AO is back.  And Pied Piper of Generation Bleu is on the offensive against another Secret in the American Southwest. And as a breath of fresh air, we start to get some back story on the leaders of Pied Piper Ivica and Rebecca. And while Ao goes through a bout of schizophrenic heroism, we learn  some of the details behind Ivica Tanović, and what motivates him. And as he leads the crew of the Triton, as it’s captain and father figure, is it really him that plays the flute of Pied Piper? 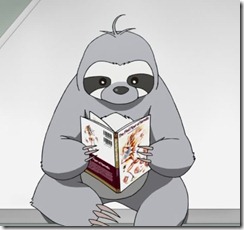 A dark and sad past lives within Ivica Tanović. Originally from the Balkans, he fought as a soldier when his country fell into civil war after a scub coral burst.  Through circumstances unknown, he ends up with Generation Bleu, and is now commands one of it’s ships. But why does he call his team “Pied Piper”? in a less than subtle manner, Noah drops into Ao’s lap with a copy of the aforementioned story. As the ship’s AI goes into a drawn out encyclopedic reference to the story, Ao listens on. As the episode progresses, we see Ivica and Ao have a heartfelt moment talking about the former’s past and explanation about why he chose the name. Ivica “plays his flute” as he leads the team into battle. Only, he has not intention of leading his children to their deaths. 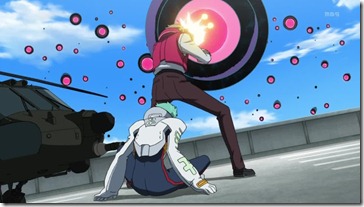 This conversation leads to a turning point in this episode for Ao. Up until now, he has been frozen by fear, unable to act to protect himself. But for whatever reason, this single conversation gives him the courage to act on a theory. While his action is dangerous, they prove something new about the Options deployed by the Secret: They only attack things that have the form of a human. And with a little creative camouflage, Everyone escapes safely.

And as the episode concludes, we begin to see the beginnings of a true partnership between Ao and Ivica. Ao is learning to trust Ivica, and vice versa. When it comes time to attack the secret, Ao executes the plan, drawing fire, and proving their theory. We begin to see a separation on how the interactions between Ao, and Fleur/Elena. As the Secret explodes, Ao has a new found respect for Ivica. And when Rebecca chides Ivica to remind this that the kids need a “piper” to lead them, he responds that it may actually be the kids who are leading him.

This episode was a nice break from the constant bombardment of situations, without the background for understanding. And from the looks of the preview, we may get to see a little more of the alternate life of Elena Peoples.

If anything, this episode reminded me of The Matrix trilogy, where the machine hunter killer units would destroy humans upon detection. AO’s terror brought me back to that.