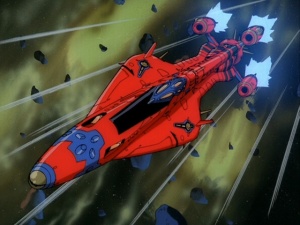 As I previously lamented on this blog, Outlaw Star ranks highly in my favorite anime list. It is an action filled series, that takes you through a wide range of adventures and humor in its’ 26 episodes. And it starts brilliantly in the first story arc.

If you’re going to go big, throw in the kitchen sink

When developing an environment, you might as well make it as huge as you can. In a space based anime, there’s no reason to limit yourself. Outlaw star has a huge environment to build on. Faster than light travel allows for unlimited destinations. Alien species of varying types and sizes make for unique species traits, and dynamic interactions between them. Then lets get creative by having a space army, ‘outlaws’, and pirates. And not just any pirates. Chinese, magic wielding, space pirates. No little high school girls on a cruise in this show.

A show needs a purpose
My biggest frustration with slice of life anime is the lack of a clearly defined object. Where is it going? What goal are the main characters shooting for? Outlaw Star defines the goal straight away: the purpose is to reach a hidden treasure. A treasure that every force in the universe is searching for. And whether the main character wanted to or not, it is now his objective after being drawn into the search.

A sidekick never hurts, as well a beautiful woman
Every sidekick needs a hero. And much like Watson to Sherlock, Jim Hawking is the counter balance to Gene’s reckless nature. A longtime friend and business partner, Jim is his perfect sidekick, even referring to himself as the brains of the operation. Their banter and interaction is great, the work of a well written friendship.  And when a sidekick isn’t even, every team needs a beautiful, but helpless damsel. We find that in Melfina. While her past is unknown, her purpose is not as the organic component to the ships navigation. Her soft voice and easy going innocent demeanor make her the belle of the show. 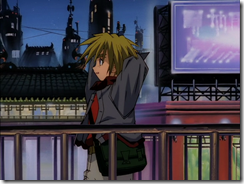 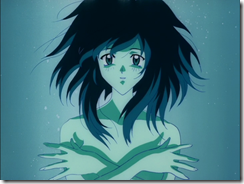 The main character needs a tragic event to drive him, and a second one doesn’t hurt.
What builds character more than a tragic event. In a flashback, we learn that Gene Starwind, the main character, loses his dad in an attack on his first outing in space. This leaves him emotionally scarred and unsure of himself. It even becomes the butt of a joke due to his “inability to perform”.  To make sure that he is driven to space and new goals, the shows throws in its second tragic event. His blossoming partnership with an Outlaw named Hilda, who brings him back into space, is destroyed when she dies in a pirate attack. But when the first tragedy broke him, the second will drive him forward. 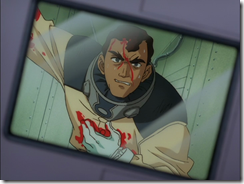 This first arc provides much of what the watcher needs to be instantly immersed into the story. Not much dialog, lots of action, and some crazy magic pirates make this show a great watch that anyone can enjoy. Here’s a remix featuring dialog from Outlaw Star with some other anime.

23 thoughts on “Outlaw Star and its Perfect Opening”